by: Sanju Verma
Spread the love 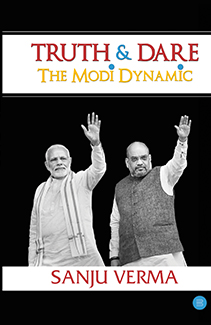 What makes this book by Sanju Verma, special,is its eye for detail and the in-depth and exhaustive manner in which it elaborates on every single facet of Narendra Modi’s economic policies, popularly known as Modinomics, besides tracing the eventual demise of Nehruvian Socialism.She explains why Manmohanomics was never a force to reckon with.In sharp contrast,Modinomics is a powerful idea that has transcended beyond Narendra Modi—it is now a generic idea that stands for everything that is associated with good governance,inclusivity,poverty alleviation and has truly transformed India from an economy of job seekers,to one of job creators.

The book answers how Demonetisation unearthed black money,why it is a game changer in terms of formalising large swathes of the informal economy, why “One Nation One Tax” via GST, needs to be lauded for its seamless execution,how the “Mudra Yojana” has truly empowered over 15 crore aspirational Indians,how e-NAM has empowered farmers and,much more.How Modinomics has laid the foundations for a 10 per cent GDP growth trajectory through innovative and sweeping measures like the Sagarmala and Bharatmala projects and the Insolvency& Bankruptcy Code,have all been analysed and explained in detail, to give readers a flavour of how Modinomics epitomises “Sabka Saath Sabka Vikaas”,in more ways than one.
The book also showcases how,thanks to the strategic genius of Amit Shah,BJP is today,not only the largest political organisation in the world with 11 crore members and counting but,also an election winning unstoppable juggernaut that has its eyes trained on Mission 2019 and beyond.The second part of the book which exposed the weaknesses of “Gathbandhan politics”, is also a stinging critique of the failed “Raebareli-Amethi” model and explains why Rahul Gandhi’s hope of becoming the prime minister of india,is merely wishful thinking.Most importantly,this section of the book,also explains why “Beti Bachao Beti Padhao”,has been one of the most transformational and game changing moves in post independent India,giving “social inclusion”, a whole new dimension.