MY DERAILMENTS WITH TRUTH 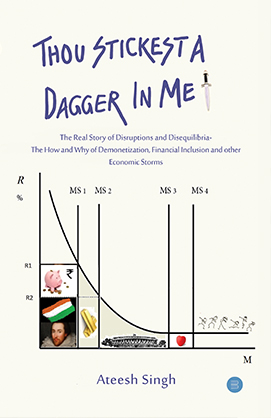 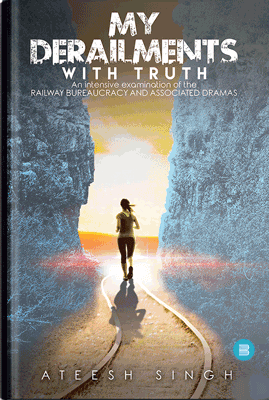 My Derailments With Truth’ is an amusing journey of a Railway Officer in the pursuit of excellence in public services. Her journey takes one through the distractive dramas which ensue as the Control Office tries to run trains lawfully. Ravina Shekhar starts off ‘Right Time’ from an overcrowded platform just like a newly announced train in the Railway Budget. As she chugs along an over-wrought career path, the steel frame strangulates her ideations and the high horses of power mock her polished percipience. Train operations fascinate her but there are scoffing side games in the loop lines which derail mainline work. On the personal front, she lives out a ‘Karma precedes Kismet’ construct. As she dares the bull-necked and buttoned down bulwarks of an over-particular society, the overbearing rule keepers batter and bombard her convictions and conclusions. She fights back and holds on to her rectitude but only after derailing unrecognized true love, leaving her baffled and bemused sporadically. Ateesh Singh is an Indian civil servant who currently serves as Director, Department of Financial Services, Ministry of Finance, Government of India. He is an Indian Railway Traffic Service (IRTS) officer of the 1994 batch who has served in various positions over Northern Railway. Having been brought up in the serenity and sinlessness of Shimla hills, and having had a civil servant father, a man most well known for his compassion and uprightness, he acquired an unprompted proclivity towards justice, truthfulness and integrity. It is this very bedrock of righteousness which today allows him to steer himself onward in the muddled and turbulent waters of bureaucracy of the day. He currently lives in New Delhi along with his wife, Anita, two adorable children, Aaira and Arhaan, and two loveable dogs, Misha and Macy.

“MY DERAILMENTS WITH TRUTH” Cancel reply